The Art of Nurturing Communities

Governments like to turn on the rhetoric about helping communities to develop and thrive. But while some politicians genuinely support community development by investing resources in what are known to make a difference, others talk about building a ‘Big Society’ even as they embark on doing the very things evidence tells us would sap communities’ strength and destroy social cohesion.

Someone will inevitably ask: what differentiates between effective community development and superficial, or worse, counter-productive, activities that do more harm than good to community life? The truth is that there is a wealth of resources out there. From the Community Development Foundation to the materials produced in relation to the Together We Can programme, there is no shortage of information to guide us. And if one is looking for a one-volume handy guide, there is Community Research for Community Development, ed. by M. Mayo, Z. Mediwelso-Bendek, & C. Packham (Basingstoke: Palgrave Macmillan, 2013)

This book is particularly illuminating when it deals with the issue of researching what works in community-based activities. By bringing together a group of academics who have actually engaged with community organisations, it has given us a collection of essays which combine analytical clarity with practical understanding.

The editors contributed an invaluable opening chapter that tackled head-on some of the most difficult problems in researching community development. They drew attention to the need for conceptual rigour. Community development is enhanced by state-community sector partnership, but undermined by communities having to pick up the pieces of a dismantled state. Following Alinsky’s focus to organise in localities to attain achievable goals in the “here and now” is quite distinct from Freira’s injunction to understand and challenge the underlying causes of social injustice. Doing one does not guarantee the other.

From the book’s wide range of insights, case studies, and wise counsel, I would like to share three ideas that strike me as most important. First, governments concerned with learning about what impact individual community development programmes are having should avoid pressing for evaluation in narrow, pre-conceived, and often irrelevant terms. Those who only ask how many golden eggs are laid by a flock of geese, so to speak, will never appreciate, as the Romans did, the protective value of geese as ‘guard dogs’.

Secondly, researchers should be given scope to tailor their study to help community groups learn more about their own strengths and weaknesses as a constructive exercise, rather than simply to churn out data to respond to measures drawn up by funders. The former approach would actually often lead to more improvements than the all too frequent use of the latter.

Last but not least, both funders and community-based practitioners should learn to bridge the contrasting ‘languages’ they use by developing at the outset a common understanding of a shared enterprise. An enterprise, all involved would do well to remember, which is likely to resemble less a scientific experiment (where input, output, impact can be measured in precise, pre-defined terms), and more a team-building exercise where people come to discover and celebrate their collective potential as a community.

Posted by Henry Benedict Tam at 00:42 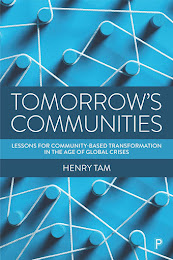